A few years ago my friend Arnold told me that whenever he learns a new programming language, he writes code in that language to solve the same specific problem. Sort of like an extended Hello World. That problem can be stated as follows:

Write a program to generate and print a maze, where each room is connected to every other without cycles.

This problem is a nice one to explore a few programming topics and opens the door for expansion into other interesting ones. In this article I am going to discuss choosing a data structure to represent a maze as needed for the basic problem as stated.

Mazes can be made in a variety of shapes and styles. For this exercise, we will only be discussing two dimensional, rectangular, simply-connected mazes of arbitrary size. There will be no closed-off areas and no path cycles. We will call the rooms of the maze “cells”. We will label the cells starting from 0 and increasing from left to right across the first row, then continuing with the next row. 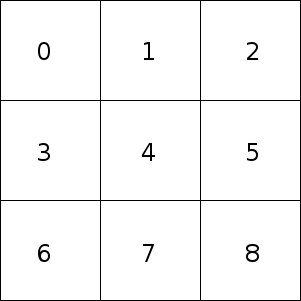 Two adjacent cells may or may not have a wall between them. If there is no wall, then we say that there is a passage between them. Start and end points are not relevant to the creation of the maze layout and can be any two cells chosen later. We use “north” to refer a cell “above” another cell, “east” to refer to a cell to the right, “south” for down, and “west” for left.

Uses for the Data Structure

When choosing a data structure it can be useful to list the things you expect it to do. At this point, we don’t know many details about how we will do things. But for now we know we want to:

Later we will want to:

The first data structure that comes to mind is an array of cells, where each cell contains bits to track each of connections to the north, east, south, and west. This works. It is space efficient and discovering if the connection between two cells is a passage or a wall is determined by simply indexing the array and looking at the properties of one of the two cells. When generating the maze, you must take care that the connections between adjacent cells remain in sync. That is, if cell t says there is a passage to cell u, then cell u must say that there is a passage to cell t. This data structure is redundant in that the connection between two adjacent cells is tracked by both cells. And it feels awkward.

The mazes we are discussing may be thought of as undirected acyclic graphs. The cells are nodes and the passages between cells are the edges. Any cell may be chosen as the root and the nodes can be labeled with the cell number. 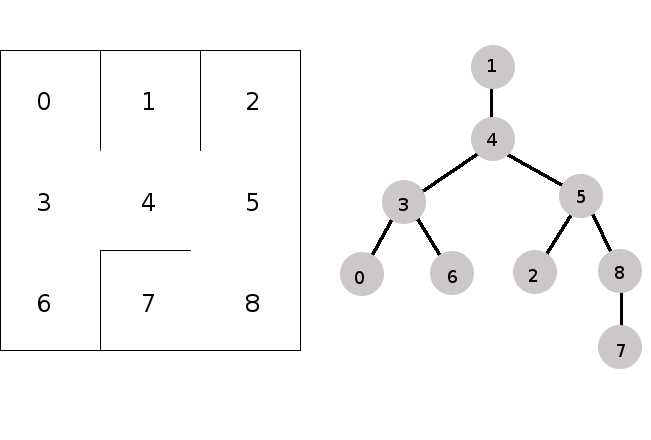 If two nodes are connected, each will point to the other. While redundant in that way, this is still a relatively efficient data structure. It could work, but it feels more complicated than the “Ad Hoc” version. Let’s keep exploring. 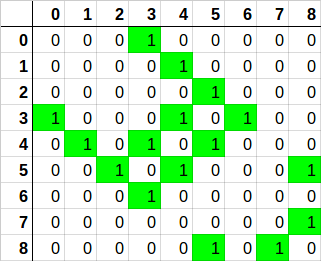 Determining if two nodes are connected is indexing a single position in the matrix to see if it is a 1. Finding a node’s neighbors is walking that node’s row looking for ones. Again, this is not too complicated.

The matrix holds zeros and ones, so we only need one bit for each position. However, we need n² bits. This will be a very sparse matrix because each node can only have four possible neighbors. This is an inefficient use of space. It might be fine for the typical mazes we expect a human to solve, but let’s assume we must support Mazes of Unusual Size. We can do better.

For a maze with n nodes, let’s label the vertical walls of the maze from 0 to n-1, as shown here: 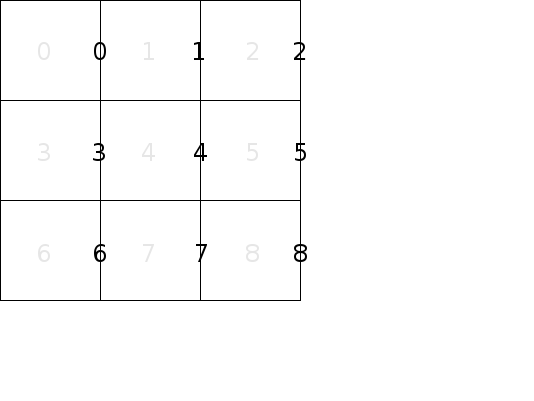 And let’s label the horizontal walls in the same fashion, but starting with n instead of 0, as shown here: 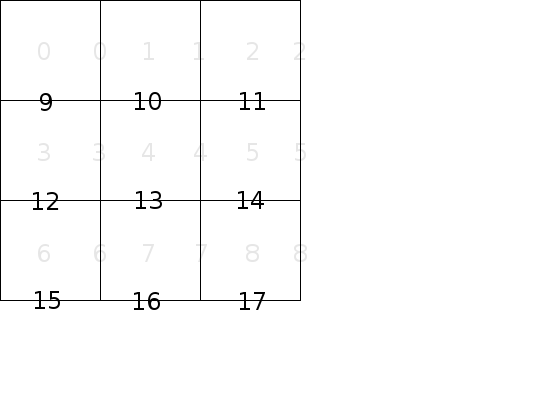 Note that we are interested in the walls between two cells, so we don’t care about the walls that surround the maze. We include the walls at the right and bottom edges of the maze in our numbering because it makes finding the wall between a given set of cells easy. We never actually use those values.

Of the options considered, I like this “Vector of Edges” representation best because it is efficient, easy to understand, and simple to code.

Sample Implementation of “Vector of Edges”

Here is a sample implementation of the “Vector of Edges” design in C++. I have omitted the details of creating the wall configuration and printing the maze. We can visit those template function implementations later, but if you want to see the source code for those right now, you can visit https://github.com/smeredith/maze/tree/choosing-a-datastructure.

I recognize that the std::vector<bool> specialization has some peculiarities, but for our purposes it is fine. I considered std::bitset but I want to configure the size of mazes at runtime.

Notice that the entire state of a maze is width, height, and a vector of bits describing its walls. (The data member numCells is an optimization to reduce the number of width * height calculations to one.) The member functions provided are limited to what I needed to generate the maze and to implement traverse() to print it.

We looked a four possible data structures to use for the representation of a maze. We did a casual analysis of each. Of those considered, I like the “Vector of Edges” because it is simple and efficient. In the http://www.bitmine.org/init-immutable/, I discuss why I am passing an initialization function in to the constructor.